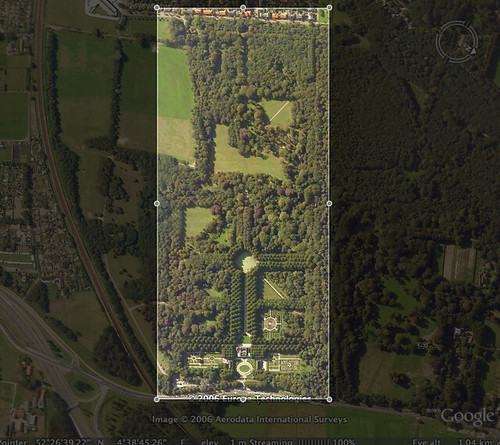 Castle Sterkenburg, in Driebergen in the centre of The Netherlands, has received a sum of € 3.307.914,00 for several restoration projects. This is over 10% of the total sum granted for restorations this year by the Ministry for education, culture and science (OCW).

Sterkenburg, which is privately owned and currently in use as an apartment building, has retained one of its medieval features: the round tower. The rest of the current building is the result of additions from the 18th century and an all but complete rebuild in the 19th century. The restoration grants are all for the buildings on the premises: the castle itself, the gardener’s house and the coach house. Continue reading

Mr. Kees de Ruiter, president of the new Dutch organisation responsible for the protection of the cultural heritage, RACM, held a plea to protect 10% of the Dutch cultural landscape as historical landscapes.

In an interview he claimed that regional differences are disappearing in an increasing pace, pointing at the same terracotta pots used everywhere and similarities between industrial estates throughout the country. At the moment no cultural landscapes have been protected formally.

And although I like the idea in general, I am slightly disturbed by the fact that the interview apparently did not state any requirements for this 10% -nor did it state which parameters mr. De Ruiter wants to use to select the greater group of so-called cultural landscapes. It did, however, state that we should be well considered about what we do with the other 90% percent of the cultural landscape, meaning the to-be-unprotected part of what can at best be descibed as an ill defined group of landscapes (within the even greater group of Dutch landscapes -which are all not natural, and as a consequence, he means the whole of The Netherlands?), which are changing in such a rapid pace, they must defy definition.

Sometimes no news is the best news.

Update (Feb 4, 2007): Unesco created this website recently, on which their criteria to ascertain whether a certain landscape qualifies as a ‘cultural landscape’ can be found, as well as an overview of the landcapes listed thusfar. Interesting stuff. Does not exactly help me to clarify what Mr. De Ruiter really wants, though.

In recent news: Natuurmonumenten has bought Jagtlust for €6,2 million. Jagtlust is one of the many estates in ‘s Graveland, but less well known because up till now it has been private property. The current owner will be living in the coach house after the sale. The house and coach house will be restricted areas, Natuurmonumenten will open (parts of) the park for public.

The house, with 9.5 hectare of land, has been for sale for over four years. Initially the asking price for the estate was €13.5 million, thus making it the most expensive real estate property brought to the market by a private owner in The Netherlands. In early 2005, the asking price had already been dropped by €4 million. The €6.2 million for which the estate was eventually sold, is brought together by the province (€3 million), the national ministry of agriculture and nature (€800.000) and two anonymus gifts (together €750.000). Natuurmonumenten expects to be able to cover the remaining €1.5 million by letting the main building and coach house.

Not noticed by the local press: Continue reading

In the mean time I have been digging up some more information on the architect mentioned in my previous post: T. Henry Reetz, though it is hard to really get a grip on this architect.

He was born in France, in 1685, and probably moved to Berlin soon after. He must have had an early talent for drawing, because the first architectural drawings we know of are dated 1695 -he was ten years old then. In 1706 he is enlisted in the Brandenburg army, as an architect and engineer. On the 5th of July 1706, Reetz was ordered by the “Geheimen Rat” (secret counsil) to draw reconstruction plans for the Moritzburg in Halle. The drawings have survived, but there are no signs that the plans have actually been executed. In 1707 he traveled into Italy, and after 1713 (the year the Prussian king Frederick I died and in which Hofarchitekt Johann Friedrich Eosander left the court as well) Reetz went to Paris. Continue reading

The Cascade weblog presents a picture of the latest discovery concerning Paleis Het Loo in Apeldoorn: a previously unknown design for its gardens. The design is dated 1706 and made by T. Henry Reetz (1680-1765), “königlich preußischen und kurhannoverschen Hofarchitekten” in Berlin.

At the time, Reetz worked for one of the people who unsuccessfully claimed rights to the Dutch throne after William III died in 1702 (thus ending the dynasty of part of the Nassau family): Frederick I, King of Prussia.
Reetz also drew designs for three other Dutch palace gardens Frederick had set his eyes on. The designs must be seen as a serious preparation for his rise to the throne. It must also have been one of the first serious projects for the young architect -of which I know next to nothing: even Thieme-Becker does not mention his name.

Cascade’s next bulletin (2006-2) will feature a complete article about these discoveries, written by the curator of Het Loo’s gardens: Ben Groen.

Update (Feb. 4, 2007): the site of the province Gelderland provides us with a report on the ins and outs of the way the groundwater surrounding Paleis Het Loo is affected by the extraction of water on behalf of the museum’s fountains. It also gives a nice look at the complexities of managing fountains at a site like this, where not only economical and ecological issues are important, but where the quality of the water and the vulnerability of the materials the fountains are made of also come into play. The report is in Dutch.

Nationaal Museum Paleis Het Loo has almost been penalised, because of leakages in the basin in the Venus fountain. In order to sustain the waterlevel in the fountain, fresh water had to be drawn from the soil, causing major changes to groundwater levels in the surrounding areas. 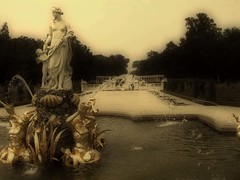 The provincial government threatened the museum with a fine, but has decided yesterday (November 7th, 2006) not to pursue. A request from the museum to withdraw more water has been approved by the province of Gelderland, which argued that in the past two quarters the museum kept groundwater withdrawals within the existing limits. Ironic in this respect is the fact that one of the main jobs of our crown prince is… water management. Think he’s pulled some strings on this one? After all, Paleis Het Loo is a former Royal Palace… 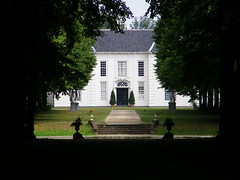 First, the new councillor responsible for Beeckestijn came with a rather peculiar statement. As the former council had almost sold Beeckestijn, there was no room anymore for a civil servant concerned with the estate. The councillor (of the D66 party) declared she now needs to find someone to do that job. You’d think she already knew that by the end of April? So what’s keeping her? Continue reading