The Dutch ministry of agriculture, nature and food quality (LNV) has presented an updated list of estates, falling under the Natuurschoonwet, which are open to the public. The Natuurschoonwet (difficult to translate) basically concerns a law, introduced in 1928 with the aim to protect estates by giving the owner fiscal benefits when they present suitable plans to preserve the estate. The estate should have a size of at least 5 hectare, of which a large amount consists of woodland. A size of 1 hectare is enough to qualify for fiscal benefits under the Natuurschoonwet for estates which are important from a historical point of view. The gardens and woodlands surrounding castle Rosendael are an example of one of the estates for which the Natuurschoonwet is applicable. 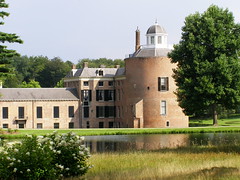 The list of estates is updated twice a year. The latest version can be found here. As the list only concerns estates for which the Natuurschoonwet regulations are applicable, it does not present a complete list of Dutch estates that are open to the public.

(Update@8-Feb-2007: Beeckestijn was awarded a place on this list as early as 1930. The Dutch newspaper Het Vaderland reported on December 2nd of that year, that Beeckestijn, together with neighbouring Waterland, Heerenduinen (also in Velsen) and Tusschenwijck (in Wijk aan Zee) was going to be protected under the Natuurschoonwet. All four estates were owned by J.G. Boreel van Hogelanden, Esq. Talk about fiscal benefits….

Of these four estates, only Heerenduinen is on the current list now. Why the other three are taken from the list, and when, is not clear to me. To be continued.)