A photo added to the Historical Gardens photo group this week made me realise that some architectural features have an unexpected provenance. The photo is taken in the Museo Nazionale Romano (Palazzo Massimo) in Rome and depicts a detail of mural paintings of a garden taken from the Villa di Livia (dated 30-20 BC). The villa belonged to Livia Drusilla, emperor Augustus’ wife. 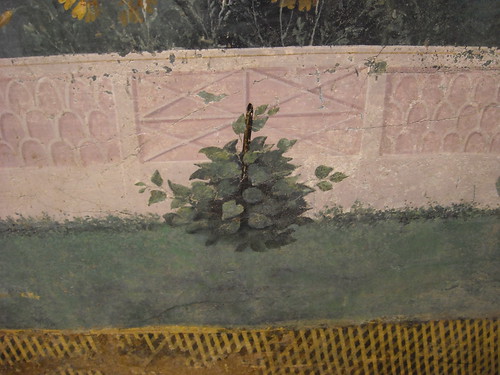 The arched decorations in the wall made me think of the same motif I saw in Paris, in Parc des Buttes Chaumont. Although in the modern version the decoration is open -as opposed to the Roman example which may be a retaining wall- the idea is very much the same. In Paris it forms part of the railing of a high bridge in the park. 1The bridge is probably nicknamed ‘suicide bridge’ for a reason. The height may also explain the gridwork protecting the arched decorations: when part of that falls down on a person walking under the bridge, it could have severe consequences. Parc des Buttes Chaumont -and thus the bridge- was designed under the reign of Napoleon III, and opened 1867. This coincides with excavations in the Roman villa during the 1860s. The garden murals were discovered in 1863, so they could have formed an immediate inspiration for the architecture of the bridge. There is at least one reference to Roman architecture in the park. The bridge leads to a hill containing the belvedere (1869), which was inspired by the Tempio de Vesta in Tivoli, near Rome. However: a drawing by Giulio Romano, now on display in Teylers Museum in Haarlem as part of a Raphael exhibition, shows that the motif was never forgotten. The drawing, dated 1535-40, is a design for a decorative shield Federico Gonzaga of Mantua gave to emperor Charles V. 2The drawing is in the collections of Teylers Museum (object number K I 006). The shield is in Madrid, either in the ‘weapon chamber’ of the Royal Palace (Raphael Exhibition leaflet, Teylers Musem, nr. 65) or in the Prado (reference in the online collection of Teylers Museum).
Highlighted is the part where the same arched decorative scheme can be seen as in the Roman villa and the park in Paris (click here for a larger view). Here it is part of a ship carrying Charles V, a Victory showing his motto ‘Plus Ultra’ and Hercules bringing ‘his’ two columns on board. What part of the ship it is supposed to represent is not quite clear.
Thusfar the only real connecting factor seems to be that all three works of art are made on behalf (or under the reign) of emperors.

Meanwhile, I am quite certain I’ve seen this motif used in The Netherlands as well, like in Paris as part of a 19th century bridge. But where…? I’m thinking Backershagen in Wassenaar, but can’t confirm from behind my desk.

Some motifs that are passed on from classical architecture till this day are quite well known. Others are not so obviously classical. Here a small decorarive motif used in a bridge in Paris is traced back to a Roman mural dating from 30-20 BC. But a 16th century drawing shows that the motif was never really forgotten.