A Dutchman at Dadiani Palace, Georgia

Dutch newspaper Volkskrant today reports about a Dutch garden architect who is active in Georgia, the former Russian province. The architect and his Dutch team have probably profited from the fact that the wife of the Georgian president is of Dutch origin. Martin Veltkamp, the architect, says the president himself ordered his consul in The Netherlands to find him a team who could make a design, and be ready on Independence Day, May 26 2007. Apart from some minor construction work, the team was able to meet that deadline. 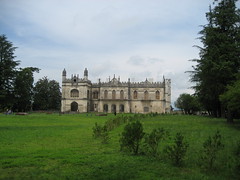 The Dutch architects are currently working on projects in Tblisi, Georgia’s capital city. Their first realised project are is a ‘childrens rest park’ in the gardens around the Dadiani Palace Museum and botanical gardens in the western town of Zugdidi. Situated some 50 kilometers from the Eastern shore of the Black Sea, this town apparently boasts a tropical climate. President Saakashvili opened the ‘childrens rest park’ near the museum on Georgia’s independence day. For the park, trees from France and The Netherlands were brought in.

I hope to be able to give some more information about the actual plans, in the mean time we will need to make do with this photograph of what certainly is new plantation -but probably is not part of the new work in Zugdidi. Having looked at some of his work, it is probable Veltkamp only designed plans for a small portion of the park. Update @ September 10, 2007: there is a picture available here, together with information that the part Veltkamp worked on is 1.5 hectares in size.

Martin Veltkamp has been active since 1983 and is now rapidly becoming one of the most renowned garden architects of The Netherlands, at least one with a very international profile.

In 2006 he opened an office in Dubai. One of the few examples of his work I have found (outside his own website) is this design for a house that was for sale in his hometown Bergschenhoek. If this is anything to go by (and seeing the examples on his website it probably is), Veltkamp designs geometrically structured gardens, with several almost secluded areas which all have their own use. In short: ‘cottage style with a rigid twist’ (and just pretend ‘rigid’ can ‘twist’). These areas are contained within and lined with hedges or other natural materials. For the details within these areas, high grade (read: luxury) materials are used.

According to a description in a local (Bergschenhoek) online newspaper, his aim is to design gardens with a minimum of maintenance and a maximum of pleasure. The owner/user of the garden should not be bothered by the design, the design –and subsequently the garden- should assist him in the entertainment of his guests (Veltkamp’s own website). We can see why he opened an office in Dubai, there should be a big market for his trade there.But Georgia? Well, we can’t blame the architect for trying. Update @ September 30, 2007: In the Volkskrant article Veltkamp states that he will have ten year’s worth of work, if the current government remains in power. Since the arrest of an opposition leader earlier this week by president Saakashvili has lead to widespread protests, the future is looking bleak for Veltkamp’s upcoming office opening on November 1st, 2007.