Hi, my name is Victoria Palmer and I am excited to share with Henk’s readers about my new heritage garden project at the Wellington County Museum and Archives in Ontario, Canada. Working at the oldest standing county poorhouse in Ontario is quite a privilege. As the heritage gardener I am responsible for designing and maintaining the gardens on the museum property, of which there are over 200 acres divided into fertile farmer’s fields and picturesque Carolinian Forest abutting the Grand River.

Built in 1877, what is now the museum building, housed the counties destitute for over 60 years as the Wellington County House of Industry and Refuge. The museum houses a scale model of the ‘Poor House’ and its garden as it was 15 years after opening (the situation in 1892): 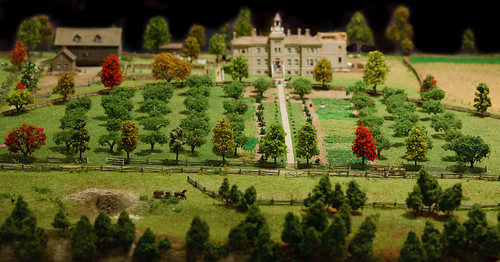 We recently installed Kitchen garden plots that are filled with many of the vegetables that would have been grown on the property, to enflesh the interpretation of the site as a working farm. The produce is used for programming and donated to the local food bank. This land still provides for people in need even after all these years, which I think is an awesome connection to its past. This summer we are thrilled to announce our new workshop series ‘No Idle Hands: Working in the Poorhouse Gardens’. During these workshops we offer a hands on experience of what life would be like for people living in poverty during the 1930’s and 1940’s in the country side of Ontario. Participants will engage in daily tasks that would be assigned to inmates on the Industrial Farm such as digging up potatoes, pruning the apple orchard, or scaring away pests using tools and techniques of the era, and learn about some of the shifting cultural mores surrounding the issues of poverty and morality. They will also have a behind the scenes tour of the heritage out buildings and partake in a small meal that would have been served to the men, women and children who called the poorhouse home.

The workshop will take place on three sundays in August, September and October 2012 (the one in July was already done). More information can be found here and here.